Gloria Jean, David LaPlante and Stephen Pounds are All-She-Wrote, an acoustic, harmony folk/Americana group formed in Albany, NY, in 2002 from the duo, LaPlante & Pounds, and singer-songwriter, Gloria Jean.  Collectively they have performed all over New York & New England, plus Texas, playing instruments made by David LaPlante, renowned luthier and Martin Guitar expert.  Their contribution to the folk circuit are authentically played songs from the 60’s-70’s plus Gloria’s originals, making an enjoyable show of old and new with beautiful three-part harmonies and multiple acoustic guitars.

All-She-Wrote has two cds as well as two previous cds from their “solo” days as LaPlante & Pounds and singer-songwriter Gloria Jean.  They have a broad repertoire of classic and original folk/Americana developed over decades as musicians.  Their interpretations of folk classics pay homage to their roots; and Gloria Jean’s originals reveal a lifetime devoted to the craft of songwriting with a writing style that goes beyond the folk genre.  LaPlante & Pounds provide their distinctive complementary finger-picking style to Gloria’s original songs, making these new songs sound classic.  They take on love, loss and global warming with beautiful arrangements, intricate guitar work, and warm, rich harmonies.

With songwriting influences such as Rosanne Cash and Jimmie Dale Gilmore, with whom she studied; and unusual stories to tell about John Sebastian, Pete Seeger, Peter Paul & Mary, and others they have had the pleasure to meet, this trio provides an interesting and enlightening show. 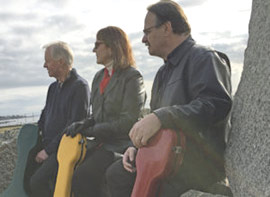 All-She-Wrote was a pleasant surprise to many of us here at KUMD . . . good songs, nice arrangements, and Gloria Jean’s burnished vocals have just the right touch of weariness to allow these tunes to wear well.

Clearly devoted to the acoustic resonance of real-life, these three are homegrown and rich in flavor. Their voices and arrangements are at once reminiscent of family and friends . . . originals!

From the moment I started listening to All-She-Wrote, I didn’t want to stop. Everything about the trio is wonderful – the songs, the arrangements, the vocals, the harmonies, etc. etc. Fantastic!!!!!!

“Love Is Something,” found on the “All-She-Wrote” EP, “Double Feature,” is an excellent composition and is worthy of greater exposure. Gloria Jean’s vocals clearly ring out the enthusiasm portrayed by her lyrics. A four or five star (*****) song and performance!